All of our instructors are highly qualified and trained using our proven teaching philosophy and tiered-lesson curriculum, but our Superior level instructor are managers, have competed themselves or are swim team coaches as well.
Get individualized attention! 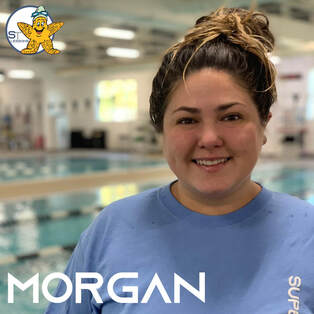 ​Coach Morgan is the Head Lessons & Operations  Manager at Superior Training.  She started her swimming career as a member of Westmont Swim Club at 8 years old.  She swam under Adam Cremieux during her time at Westmont Swim Club.  As a coach, she has now come full circle by joining West Swim Club, now FMC Aquatic Swim Team, coaching staff in the winter of 2018.  Morgan has assisted with 8 & under, 9 & 10s, and senior group. She is currently helping the 11-12 group with Coach Adam.  She comes with 15+ years of experience. She is excited to bring that knowledge and experience with to the RISE Aquatic Club.

Morgan grew up swimming club through her high school days at ICHS in Elmhurst.  She then continued her swimming career at Monmouth College.  Her favorite events included the 100/200 Fly, 400 IM, and the mile.  Morgan then graduated from UW-Whitewater with a degree in English and Communication, and a minor in Human Services: Social Work.  She continued her education by getting certificates in Phlebotomy/EKG and her Medical Assistant Degree.  Before Morgan became our Head Lessons & Operations Manager, she worked full-time at Edward-Elmhurst Hospital in the Neuroscience Institute as well at the Edward-Elmhurst Clinic in Hinsdale.

It seems as if Morgan is never far from a pool as she has been working at Edgewood Valley Country Club since 2006.  Not only does she help run and manage the pool, but she was also the EVCC Sports Camp Coordinator for 10years. In the past, Morgan also volunteered her time and knowledge as a water polo coach and dryland coordinator at Hinsdale South High School. 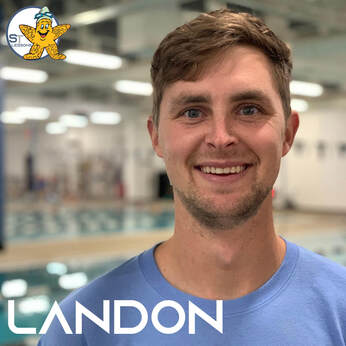 ​Coach Landon started coaching at West Swim Club (now FMC Aquatic Swim Team) since 2018 and primarily worked with the 9-10s, Senior, and National age groups.  During the Winter 2021 season he was focused on helping Coach Adam with the 11-12 year olds.  He also assisted in dryland practices for the kids concentrating on core and calisthenics.
Landon started swimming out of the Hinswood Community Pool and HOSC swimming program.  He continued swimming career while attending high school at Hinsdale South.  Preparing for his senior year, Landon swam under Coach Adam.
Landon was fortunate to continue his swimming career at University of Wisconsin-Whitewater where he primarily swam the 50 Free, 100 Free, and 100 of anything else.  He holds the 50(20.95) and 100(46.03) free records at Whitewater (still!), as well as in many relays.  His senior year he was awarded to be a Second-Team All-American for his team’s performance at D III Nationals. Landon’s 5th year he was a student assistant and helped create and coach the dryland program for Whitewater which led to many team records being taken down that next year.
​
Landon is a teacher at a local middle school and enjoys teaching and coaching in all circumstances.  During the summer, Landon is also the pool manager at Edgewood Valley Country Club.  He is Head Coach of the swim and dive team that has won countless Conference Swim Championships as well as Dive Championships.  His team has also won the sportsmanship award 2 years running.
​
​Fun Fact:  Landon was also the Mascot at UW-Whitewater for 2 years, GO Warhawks!
Coach Landon works with all swimmers but specializes in our competitive & adult private lessons.
​Private Lesson Availability (LIMITED) 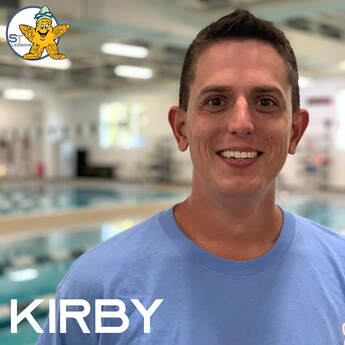 ​Coach Kirby has been involved in the sport of swimming most of his life. His swimming career began at the age of seven. He swam for several teams in the Chicagoland area, including Westmont Swim Club.  Now in his early 30’s, Kirby’s passion for the sport has grown.

As a USA Swimming Age Group Coach, Kirby has worked with a broad array of athletes. He has spent years coaching senior and elite level swimmers, but for the last five years he has focused on and has had great success with those 12 and under. Kirby believes that stroke technique and skill development is PARAMOUNT for a long, successful, and injury free swimming career. With this strong foundation, Kirby has watched his athletes have success and stay in the sport through high school and beyond. 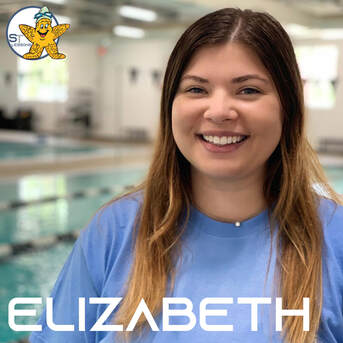 ​Coach Elizabeth grew up swimming in New Mexico and upon her graduation from La Cueva High School,  continued her swimming career at Lewis University. While at Lewis, Elizabeth competed Middle Distance Freestyle and Butterfly as a four year member of the Varsity team, while earning a degree in Early Childhood and Special Education.

Elizabeth works full-time as a Special Education teacher and uses her skills in communication and passion for children to bring fun and life to her practices. Elizabeth has played an integral role in developing Superior Training's youth lesson and team development programs. In addition to being a skilled youth and private lesson instructor, Elizabeth has coached for FMC Aquatic as an 8&Under and 9-10 group coach and progressed athletes to the Regional and State Level.
​Private Lesson Availability (LIMITED)​

Coach Matt began swimming competitively when he was 8 years old with the Riverside Brookfield Otters. He then went on to swim for the Academy Bullets Swim Club, where he was a state qualifier in the 1000 and 1650 Freestyle events and was part of two consecutive team state titles. Matt also swam for Riverside Brookfield High School and served as their team captain his senior year. Coach Matt graduated with a teaching degree from Concordia University Chicago.

Prior to joining the RISE staff, Matt was the Lead Coach at LYONS Aquatics for their high-performance 11&12 athletes and also led one of their Senior programs. Before that, Matt was both a Senior and Age Group Coach with the Express Swim Team.

Matt is currently an Assistant Coach with the Men’s Swim Team at Lyons Township High School, which most recently finished 3rd overall at the 2022 IHSA State Championships. Matt is extremely excited to share his knowledge of the sport and to teach his athletes the importance of hard work and perseverance.
​Private Lesson Availability: 10AM-3PM Monday-Friday (ACCEPTING) 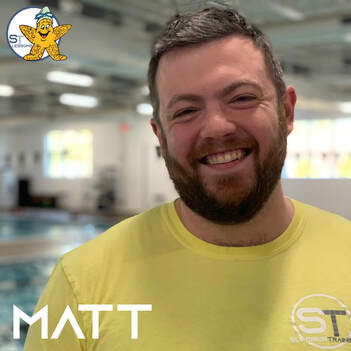 ​Coach Matt is one of the newest members at Superior Training, however, not new to aquatics. Matt has been in competitive swimming since the age of six at the Westmont Swim Club and playing water polo since the age of seven. He continued his passion at Fenwick High School and was a three-time state champ. He continued his swimming career into college. While swimming at UW – Stevens Point, Matt specialized in the 100 back; 200 butterfly and 100 back; 200 backstroke. Only competing his freshman year, he made the conference team and the NCAA national team. He was named Collegiate All American and Freshman Athlete of The Year for Stevens Point.
​
Matt could not stay away from the pool for long as he also coached Hinsdale South’s water polo team.

Coach Matt has a business degree and while not at the pool he is works in the family business as a purchasing agent for Renaissance Construction Fasteners.
FUN FACT: Matt coached Coach Landon his senior year at Hinsdale South in Water Polo.

Looking to get extra work with backstroke or butterfly or maybe even your starts and turns? Reach out to Coach Matt and he can help!
​Private Lesson Availability (LIMITED) 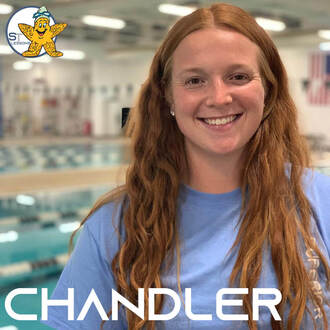 Coach Chandler started coaching at Napoleon Aquatic Club, located in Ohio in 2008.  She began with the 8 and under group and over the years worked with all age groups including coaching the high school group in the mornings. She then moved to Cleveland for college and continued her coaching career for Lakewood Rangers Swim Club, mainly working with the 8 and unders.  Upon moving to Chicago, she began coaching Edgewood Valley Country Clubs' summer swim team along with Coach Landon.  During the school year, she is a manager for group lessons at superior, gives private lessons, and is one of the coaches of the Superior STARS group. Chandler began her swimming career with private lessons at the age of two and by the age of five was on the Napoleon Aquatic Club where she swam for the next 13 years competing for them at the high school state meet. Chandler was able to take her talents to Baldwin Wallace University in Cleveland, Ohio where she swam the 100 Fly, 200 Fly, 100 Back, 50 Free, 100 Free, 200 Free, and her personal favorite the 200IM. She held the school records in the 50, 100, and 200 Free, 50 and 100 Fly, 50 and 100 Back, 100 and 200 IM along with other teammates in the 200 and 400 Medley Relay, 200, 400, and 800 Free Relay. Five years later and she still holds 10 of the school records.

​Chandler graduated from Baldwin Wallace University with a Bachelor of Science in Education where she has since gone on to become a teacher. She taught 4th grade for four years and has taught 2nd grade for the last two years. She enjoys working with kids and swimming. Putting two things you love together, swimming and teaching, seem like a match made in Superior Training Heaven!
​Private Lesson Availability (FULL)
Shape Divider - Style waves_brush 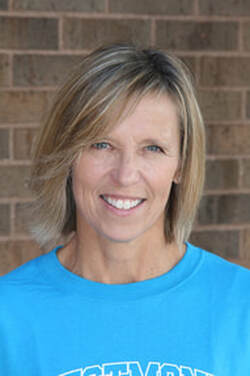 Coach Barb has been with West Swim Club since 2005. Barb has been in and around the pool as a swimmer, instructor, coach, meet director, parent, and volunteer for many years.

She began her competitive swimming career at age 6, following her brothers into the water. She has been an instructor of all ages (age 5 - adult) since her teens. In addition to age group swimming, Barb was a two-time Nebraska High School State Champion in the 100 butterfly. She placed in the top 5 in State in a variety of events all four years of high school. Barb went on as a scholarship athlete to The University of Kansas. Again, placing in the top 5 in her events at the Big Eight Championships, with her team winning the conference title. Barb received a BA degree in Speech Communication from The University of Nebraska.

Barb and her husband have three children that have all been swimmers for WEST Swim Club and Hinsdale Central High School. She enjoys coaching every level of swimmer at any age!